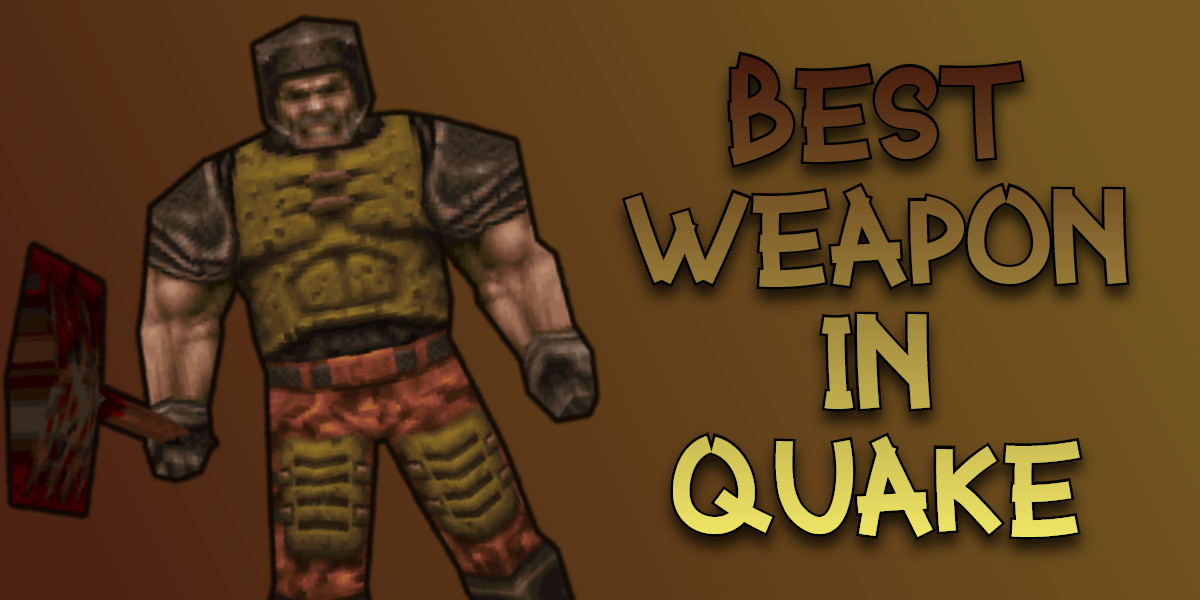 Unlike Quake’s Father Doom, it might be a little hard to figure out what the best gun in Quake is.

Quake doesn’t have a weapon or gun labeled the BFG with limited ammo letting you know it’s easily one of the best guns in the games.

The Original Quake also starts you a shotgun unlike many titles before it and handing you a single-shot pistol. With the Shotgun, you can also upgrade to the double-barrel later on in the game via pickup.

Quake at least the original is a game that doesn’t feature a sniper rifle or in future installments of Quake the Railgun.

So What is the Best Gun in Quake?

In my opinion, the best gun in quake to kill an enemy the fastest is the Thunderbolt or better known these days as the Lightning Gun.

Taking out Shamblers, Knights, Orges what have you… the LG as long as you have cells is the fastest way to kill most creatures.

The problem with Quake in general though is a game like Quake can very situational. Just because the Thunderbolt (AKA Lighting Gun) is probably the quickest way to kill an enemy. That doesn’t mean it’s always the best gun to use at the time.

The LG can only reach so far and runs out of ammo quickly. What weapon do you switch to next then? Most likely you are going to switch to the Rocket Launcher or the Grenade launcher according to where your enemy’s position is.

The Rocket Launcher and Grenade launcher do tons of splash damage because of their explosions. These guns take out multiple enemies at the same time with a precise shot.

The Most Fun Gun in Quake

For whatever reason, in the OG Quake, I think the most fun gun in Quake is the Grenade launcher. Adding the Cookie Monster Mod to Quake I was just having a complete blast. Seeing the grenade turned into a flying rainbow cookie is something else everyone should do and see in Quake.

Without a mod, the gun is still fun. The Grenade sound alone is legendary.

The 2nd most fun gun of course is the Rocket Launcher. Giving you the ability to shoot the ground and do a rocket jump to places you aren’t even supposed to reach. This of course became a staple in future quakes always adding the ability to rocket jump. Also expecting players to know how to do it.

You should check out the maps and mods page and see what sort of other mods you might enjoy!

So do you think the Thunderbolt is the best gun in quake?

I believe it is the right answer but like I’ve stated above, Quake is a situational game. Just cause I think its the fastest way to kill some monsters doesn’t mean its always the best in every situation.

Want to continue the conversation? You should join Smango’s Discord.