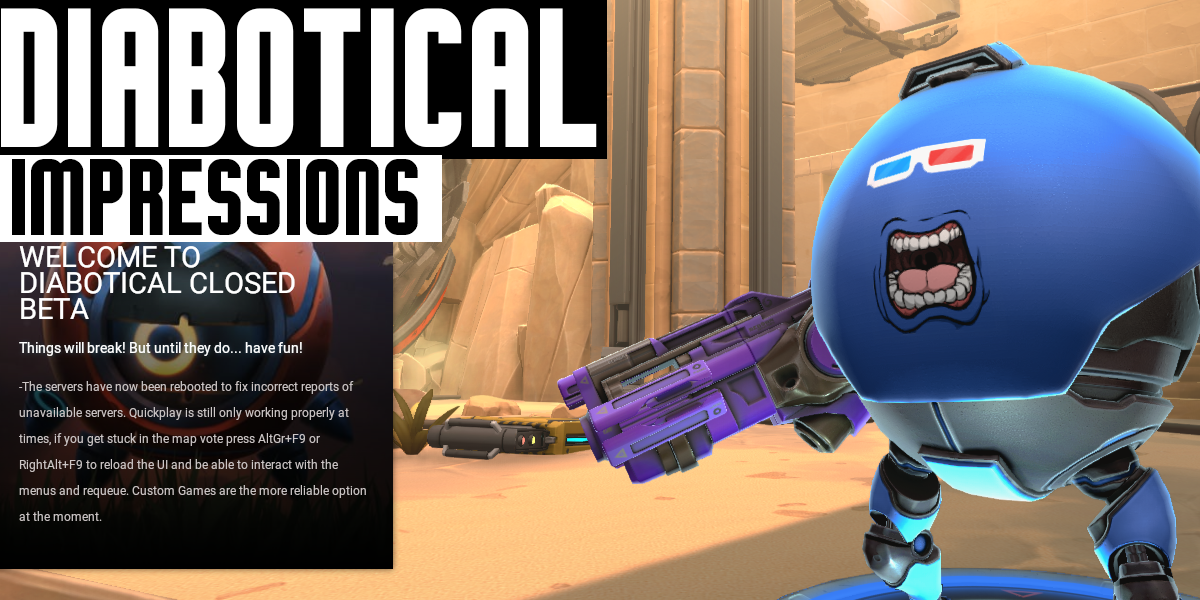 The Diabotical Closed Beta weekend is upon us and I got to spend a full Friday Night testing out the game.

Luckily I was handed a key directly from the Developers and also got my hands on a few extra keys for some of my friends and followers.

In this article, I’ll cover the issues and what I think of Diabotical in its current beta state. Please remember that this game is IN BETA but I do want to address the issues I had.

Since this article the game has been released and you can try it out yourself COMPLETELY FREE.

All the game modes are not available. But the ones that are, are extremely fun.

These are my thoughts on all the modes that I got to try out. I did try to make a map and I guess it is available… but I wasn’t able to figure out how to get started.

I believe wee bow instagib is a great spin on the traditional 1-shot 1-kill game mode most of us are accustomed too. It’s not a direct shot and kill, you have to lead your shot. I believe this is because it is a bolt instead of a single rail (the railgun still exists just not in this mode). The player spawns with a left-handed explosive wee-ball as well. You can use this to bounce yourself or your opponent into the air.

Be sure to collect your enemy’s tag so you can count it as a frag. I was only able to play this mode in a 1v1 which I will get into later.

Wipeout is the mode that everyone is excited about. It’s Diaboticals spin on the traditional clan arena game mode that is famous in quake games.

Instead of being completely left out if your team starts getting kills you can get enough kills to bring back some of your dead teammates!

Each teammate can spawn with a different wee-ball one that shields, heals, or does something wacky.

Diabotical Arena is meant to be played in a 1v1 or 2v2 setting. The maps are smaller and it feels more like the traditional clan arena but instead of 1 life, you get 2.

You also spawn on your 2nd life with a left-handed wee-ball which you can use to gain a small advantage if used correctly.

This mode lets us do all kinds of crazy things as well. I was able to play rockets and only shafts.

We ended up somehow getting a 53 round game going with tons of people.

You can watch the full Quakefans Live Stream from the very beginning of starting Diabotical until the last match that crashed!

Started by building/designing my Eggbot to ending it with a crazy 53 Arena Mode with almost 10 people!

In this video, you can find Diabotical Gameplay and what it was like to play the Closed Beta back in February 2020. Not a ton has changed since the official release of Diabotical.

Problems with the Diabotical Closed Beta

As expected the game didn’t launch perfectly. Which is expected in a Closed Beta.

I just want to address some of the issues I faced while trying to play the game. 2GD and crew addressed most of these during the day and were pushing out updates extremely fast. The most common one was Matchmaking just wasn’t working.

The servers well, they didn’t really work. I was able to set up a game using the Dallas servers but wasn’t able to do it with NA-East ever. 80% of the time that didn’t work either. So it was best to make a match using Dallas or do a Direct/LAN.

Using a direct/lan with a party would start the game but not bring your party with you or the lobby. There were several times I would be in-game while the lobby was still sitting there doing nothing. Never starting the game.

While in-game it never would show how many people were in the game either. People joined but I never could tell when or who joined or who was even on separate teams. Another issue was that the scoreboard never worked either.

Every time the game would freeze probably from an update push. It would completely lock the game. I wasn’t able to launch task manager using my keyboard shortcuts, I had to go to start and type in task manager. Thus, forcing the game to close.

Save your settings first by logging out after doing so…

This resulted in me losing my settings every time, including my egg bot design and mouse settings. My suggestion is before you do anything. Is get the eggbot you want and settings before trying to play the closed beta as it might close at any second.

The Server browser also never would load a game. But, like I said there were several server issues on-going Friday night. All the games still to this day do appear to be in a warmup state and never updates from what I’ve seen.

– Find out more about Diabotical Here –

There really wasn’t much I could complain about other than I could play as much as I would have liked due to the server issues. This, of course, will be handled very quickly if not already. I’ve heard the game compared to Overwatch or quake for kids many times.

Call it or compare it to whatever you want. The game is a great addition to the Arena FPS genre in my opinion and I’ll be spending plenty of time with Diabotical in the future and on this website.

The YouTube Channel has all kinds of videos about Arena First Person shooters and more If you Quake and Diabotical you will love the channel!