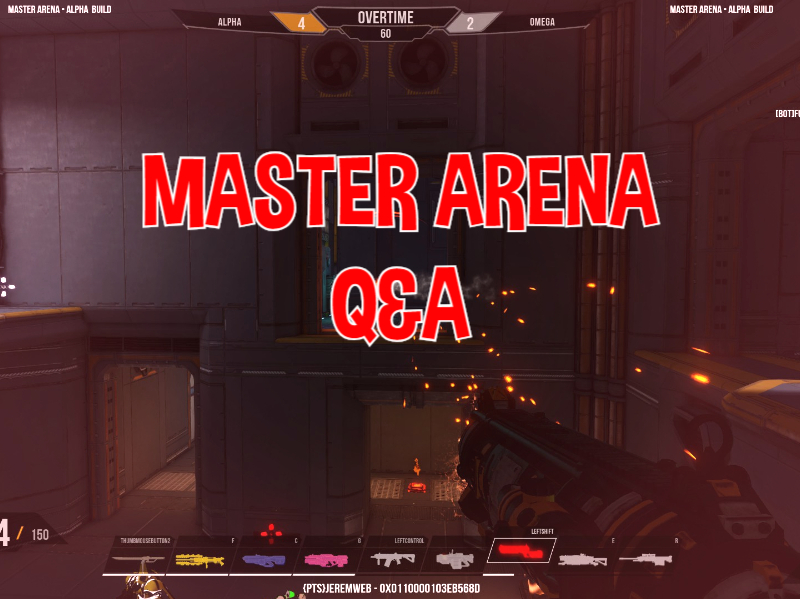 Before we get started, I wanted to get Jeremy on In The Keep. However, he is French and was understandably not very comfortable going on video and articulating himself in English. Through the MAGIC of Google Translate and some slight editing on my part.

We bring you this Q&A about his exciting new game Master Arena. I did everything in my power to protect the integrity and spirit of Jeremy’s words, while also balancing readability for our largely English-speaking audience. Please enjoy!

ML: So, the idea for Master Arena came about in 2013. It’s certainly been a long haul to get it put together. How did you get into game development and what made you want to design an Arena FPS?

JC: I played a lot at Unreal Tournament (99 and mostly UT2004) and Quake 3 Arena. My first experience on these games was on SEGA Dreamcast. I had to stop playing UT2004 around 2011/2012 when Shootmania was in beta. Then in 2013, I got bored. I was waiting for a new UT2004 or a new Quake 3 Arena, but there was nothing. Google wasn’t my friend. I couldn’t find any information about this subject. So, we had to do something. I downloaded the Unreal Development Kit from the Epic Games website and without knowing it, Master Arena was born…

ML: It’s certainly an interesting time to create an arena shooter. With the “success” of Quake Champions and other similar games, what makes Master Arena different and special in your mind?

JC: This is a relevant and central question around the development of Master Arena: “Is it different?”

But, also yes. In order for Master Arena to be a solid game, it’s necessary that the core game itself be as good as possible. That is to say that the “pure arena shooter” aspect must be good. Making it easy to learn for a new audience is a priority.

However, in most team modes, “normal weapons” are boring and the tactics are limited. And I love instagib, but how to do it…

We introduced perks with tactical advantages depending on the position desired by the player (defense/cover/attacker for example), a limited inventory of weapons, etc…

Now imagine a 5v5 CTF with the following capacities

I do not want to say too much, because I like to make surprises, but we have 12+ other perks in my game design documents. There is no lack of ideas. But many of these types of mechanics don’t currently exist in an Arena FPS. Soon, duel tournaments will be organized and that will greatly influence balancing, as well.

Master Arena will have two proposals

ML: The movement in this game is incredibly unique. Traditionally, in an AFPS you expect either strafe jumping or some variation of CPMA. Master Arena seems to have its own cool blend of more vanilla FPS movement with the added jump and Super Jump feature. Was this planned from the start or (be honest) was Doom 2016/Doomslayer in Quake Champions an influence?

JC: In the first concept of movement for Master Arena in 2014, you can see jumping, Super Jumping, and multiple wall-dodges. (video at the end)

So yes, that was planned from the beginning.

ML: A big factor in making this game successful will be putting up servers. Currently, there are so few in North America.

I saw that you were considering setting up servers in Dallas or Denver. I personally think either of those locations will do a lot for this game, opening up playability to the West coast and therefore allowing players to meet coast to coast. Is this still in the works and when can we expect to see these new servers go online?

JC: Do not worry about the servers. They will be back soon. By next week everything will come back. Note that for the game’s release, there will be more locations available.

ML: In the current Alpha, the best and most dialed in weapon is certainly the sniper rifle (railgun). That’s interesting as it’s one of the hardest weapons to get right in this sort of game. Honestly, I’d say it’s the best one-shot hit-scan weapon since the Quake Live railgun. How did you and your team prioritize this weapon and what can we expect to see going forward? For instance, the current LG is sub-par. What are your plans to “fix” it?

JC: Weapons are thought of “globally”. That is to say, no one weapon is really stronger than another, but have their advantages depending on the combat situation. Players should take their distance/position into consideration when selecting a weapon.

The Electrogun is less powerful than in Quake. It is the “global” balancing of the weapons that leads today to this result. But do not underestimate a weapon too quickly, use more alternative fires…

Finally, the balancing of weapons is updated regularly. (link provided at the end)

ML: Another unique aspect of Master Arena, as it stands, is that you’ve let go of the traditional Red/Yellow Armor that players tend to expect in AFPS games in favor of a simpler health bar and pickups for boost. How did you make this decision and how do you see it affecting gameplay?

JC: It may shock people that there is no armor in Master Arena. It’s an attempt to simplify the counting of hit-points for the player, caster and spectator. If you open the google doc (provided later) about weapon balancing, you will see that damage is based on which part of the body gets hit. For each body part, there is a particular amount of damage. It’s simple and effective.

ML: There are some very cool maps in this game. Though not all yet polished, some of them are really unique and special. My personal favorite right now is DM-Spacedock (do not Google that 😉). How is your team designing the maps, and who the heck decided on that name?! I want to buy them a beer.

JC:  There is a lot of work to be done on the maps. DM-Spacedock is the only map with a dedicated environment. That’s why it’s the prettiest. We will update all the others over time.

The names of the maps, normally, are from William, the level designer.

But sometimes his inspiration is limited to things like this

ML: Our main interest at Cthalha’s Keep in certainly the competitive and pick-up game community. The current Alpha has been centered around 1v1 instagib tournaments. This obviously makes perfect sense given how fantastic the sniper rifle is. The game also touts TDM, CTF, Race and even an “Arena Royale” mode. Do you see any potential for these other modes to become competitive in the near future?

JC: From my point of view, the competitive modes available for early access will be

Modes like Royal Arena or Large DM are for fun. It is deliberately a carnage. With up to 40 players, I do not see anything competitive about it.

ML: I can tell the team is passionate about making this game. How difficult is it developing and working with such a diverse group and most importantly, how much fun are you all having? There must be some drama behind the scenes.

JC: The biggest difficulty is the availability everyone can give to the project. You should know that the development budget of Master Arena is 0 €, which obviously effects how much time we can commit because we all have other jobs. We can’t wait to be able to work full time after the release of the game in early access!

The drama behind the scenes? No, sometimes there are tensions (that’s normal), but no drama.

The biggest drama is going to be triggered in a few days when Gabriel (3D environment artist) and I go to eat kebab without Albert (3D character & weapon artist) who lives too far away.

ML: What games were the biggest influence on you personally and which are your favorites? And don’t say Master Arena.

We hope you enjoyed this Q&A with the Project Creator on Master Arena, a new Arena First Person Shooter making strides to bring the genre back!!

We are currently hosting a Master Arena Team Death Match server. Look for Quakefans in the server browser!