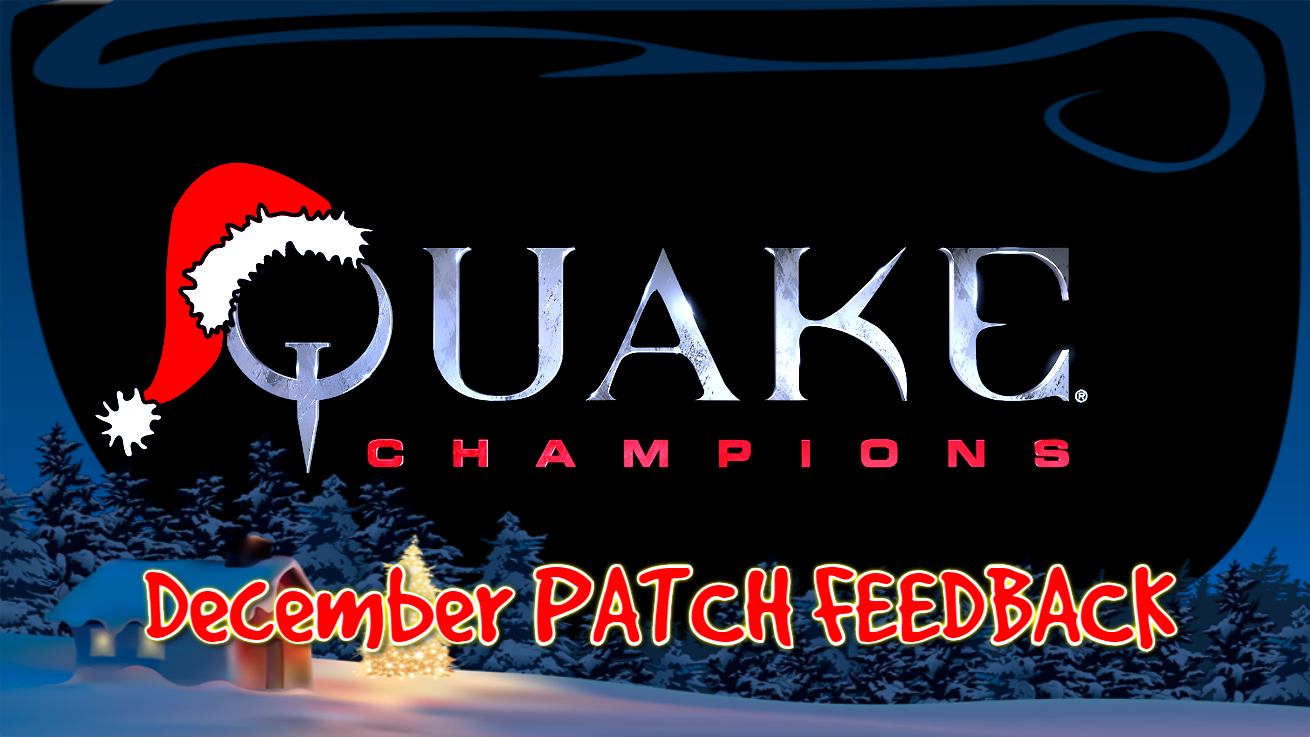 The infamous Quake Champions December Patch dropped, which included Fan Favorite Capture the Flag mode and some “fixes”. Before I dive deep into everything that has gone wrong with this month’s Patch, let me say at first that I was really looking forward to this patch.

CTF and all the awesome stuff that was coming with it I believed was going to put Quake Champions on the right path. Turns out this patch caused some major issues and CTF well just keep on reading…

Capture the Flag was no doubt the biggest draw to the December Patch. Shipping with only 1 map and really the ONLY map that is worthy of a CTF match. It really ended up falling short.

Don’t get me wrong, CTF on Quake Champions is tons of fun… but it feels really Alpha/Beta feeling.

I know, I know. Quake Champions is still in Early Access so with that in mind I’m hoping it will get some good work done to it. It’s not that CTF isn’t fun there are just so many problems that happens during a CTF Match.

We have to figure out a way to punish leavers in CTF. I’m so sick of playing against BOTS its ridiculous. 4 Humans VS. 4 Bots or really ANY bots is not fun and is really broken. The bots at literally just cannon fodder. They don’t do anything but die.

I don’t know if the Match needs to pause for a brief second or what but if someone leaves a NEW replacement has to be added and not a FREAKING BOT. Leavers also need to be punished, somehow some way. We got to keep people in the games if they join because it screws up the whole dynamic of the game.

Running up the score isn’t very fun. 15-0 matches are happening way to frequently. What is the issue? Perhaps its the Bots, I’m sure that is one. It could also be the fact that Sorlag is pretty broken unless you have a team that can defend. It’s really hard to stop her speed across the map.

Anarki is pretty broken too but from my experience, Sorlag should be the main flag carrier and is basically unstoppable with that air control.

Even with some really fast Champions, there needs to be a capture limit. Obviously there are more skilled flag runners in this game, it is pointless to make new players and casual gamers. Set through 15+ point captures as they get destroyed. This is another reason people are leaving. No punishment for doing so, and who really wants to set through that for 16 minutes?

Citadel is a great map in my opinion for CTF. But, thats it.

All of the other maps are not symmetrical at all and are just added on rooms to previous maps. Which seems like a good idea for other game types, and sort of it but not for capture the flag. It really messes up with the whole dynamic of CTF for whatever reason.

Capture the Flag is great and is a worthy mode.

Get rid of the bots, punish the leavers, add a capture limit. Then whenever the developers get a chance to make CTF specific maps.

CTF wasn’t the only thing added to this massive patch. The famous Battle pass from other popular games makes an appearance. The Quake Champions Battle Pass basically got rid of all the rune challenges and stuck them into the battle pass.

This isn’t a terrible idea, but some of the rune challenges where just dumb. As you are paying money for the battle pass to unlock more skins and prizes shouldn’t most if not all the battle pass stuff be achievable?

I really don’t mind the battle pass. I’m glad to show my appreciation for the game I love. It’s basically a $10 fee that you don’t have to pay for, but you get cool little skins and avatar etc. It does kind feel sort of like a rip off on its first attempt. Most of the skins I already had as it was winter skins etc.

The overwhelming negative performance issues that have been stated over on /r/. Speaking of QC. That place has gotten terribly negative lately. Some days I really dread logging on it and reading the stuff posted on it.

Anyways, there are so many negative comments about performance and I have to agree. It’s bad.

I started noticing the rubber banding back and fourth much more. A Hotfix has been sent out and I do believe that has cured my issues but there are still tons of reported negative performances.

8 gigabytes of ram not enough?

I have found out that whenever I added 16 gigabytes of ram in dual channel mode it really helped out performance wise with Quake Champions. Running on 8 gigabytes for a very long time whenever I was doing my PC Upgrade. I was noticing it just ran terrible with 8 for some reason.

Who ever is out there and is running a single stick of DDR4 try upgrading to 16 whenever you can and see if you don’t get a performance boost. I went from 12 to 8 during a PC replacement/upgrade.

Ram I use in my current build. Amazon Link – (https://amzn.to/2BNIg3S)

The Quake Champions community is a pretty decent one. Far as I know there is no other games that before a match starts tells you to have fun and good luck. Sure, there are some idiots and annoying people out there. The ones that comment on some of my posts are pretty toxic as well but that is just a small majority.

So why devs are you ignoring us in some of our requests? I’m going to list a few things we’ve asked for here below and we still haven’t heard or gotten word about them. Perhaps even some suggestions that could improve on some of the current performance and issues.

You do know most of your current player-base is old school Quakers right? You think they are use to setting almost 5 minutes before they can get into another match?

It really does take SOO long to get back into the action in this game. You did put some time sinkers in, to bad it doesn’t work. What am I talking about? You ever tried watching a live streamer in the client? All I ever get is ads for almost a minute then as soon as I’m able to watch the streamer. I’m finally in a match.

It literally feels useless to click on that button anymore.

I don’t care about watching streamers anyways I’d rather jump straight into a match as well as most people would. Too bad that doesn’t happen, so trying to watch a streamer is better than watching the timer go up.

Whenever I think about Quake. It’s really hard to imagine a Quake game without a server browser. But, yet here we are 2018/2019 and surprise, surprise. We have no server browser.

Far as I know there has never been a whisper or mention for this either. I mean why not?!

The champion pack owners should be allowed to host matches at ALL times and have people join in. I swear some of the worst games I’ve ever played have a stupid server browser. You ever heard of BlackSquad? Yea me either until I tried it out with a few buddies. (It’s basically a F2P Counter-Strike Ripoff)

But this crap game has a server browser. Quake Champions, a beloved franchise has nothing. You want to help our community with healthy and organic growth. Hell, you wanna sell more champion packs? Give us the option to HOST games and have people from anywhere and everywhere join up.

This creates a community, makes it easier to meet people in game and everything.

Rune Gone = Good, No button to collect all = Bad

How longs this new patch been out? I don’t even know weeks almost a month now. I’ve still not collected all my rewards for each champion. You wanna know why? Because it WOULD TAKE ME ALL DAY.

The Champions I love to play I FORCED myself to click through everything. I love the character progression thing by the way. But, for the crap, I’ve already unlocked. I don’t want to CLICK 1 billion times to unlock it ALL.

Listen this patch introduced so many good things, but it’s really, REALLY hard to ignore the bad.

I feel like Quake Champions is heading in the right direction with this update. It does however keep dropping the ball in so many places it is getting tough to ignore. I’m wanting people to ENJOY playing this game as much as I do. But, if the fan base is noticing so many things wrong and it is becoming tougher to play continuously every day.

Anyways add me ingame – KYnerd, join up in the discord if you want. We will throw some custom games together sometime if you want. Also if you want to express yourself on .

You should join our Quake Champions Forums! – Forum