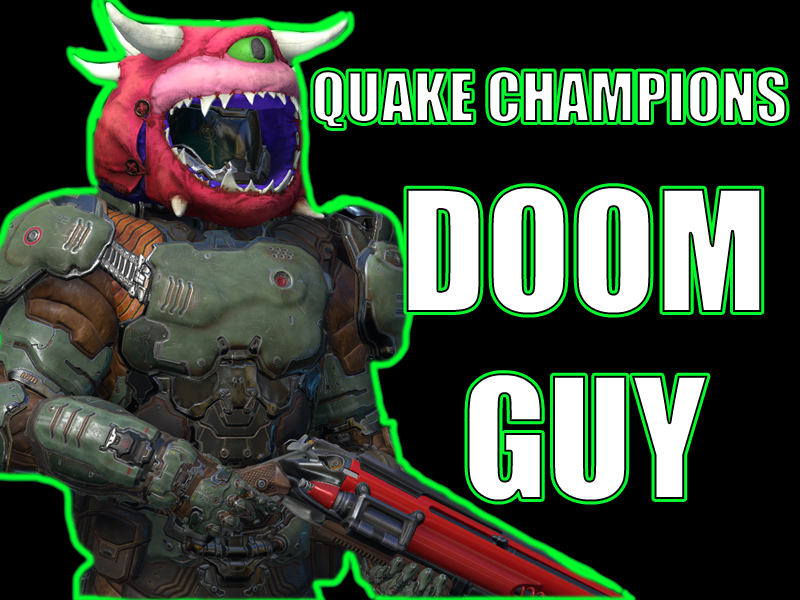 Quake Champions Doom Guy spotlight is for all those Doom fans. Also for all those QC beginners and noobs out there. That might want to know more about him and some helpful fragging tips.

The Doom Slayer is better known in the “Doom” games or the Doom series. Probably even more well known from the 2016 game Doom. With the latest game Doom Eternal coming out anytime. I just felt like it was a perfect time to do the first champion Spotlight on The Doom Slayer.

Doom was released on PC on the MS-DOS platform (Microsoft Disk Operating System). This didn’t require a fancy GUI (Graphical User Interface) to do many different tasks. You mostly would insert your floppy disk perhaps install the program you’d want to run on the C: Drive.

While Doom wasn’t the very first “First Person Shooter” it did, however, pave the way. It is considered at least the best and ed the phrase “Doom Clone”.

Many games tried to capture what Doom did and many failed. Id Software basically invented the whole genre and even spawn the game Quake.

So where does Doom Guy come from? Why he is the unnamed Hero fighting all the demons from Hell in all of the Doom Games.

Doom has been ported to literally about anything that has a screen on it. The original game is almost considered as a MEME “does it run Doom“. So that being said DOOM guy is on a billion different devices and is very popular.

Doom Guy’s champion ability comes from his game Doom (2016). He goes into a fit of rage and can basically kill almost anything with one punch. This is also known as the Doomguy rip and tear.

Using his ability makes him move very quickly on his feet.

Doom Guy also has the passive ability which grants him the ability to Double Jump. This ability come directly from the 2016 iteration of Doom. Quake Champions Doomguy abilities make him a great ranked dueler and usually banned or picked.

Doom guy is a super fun champion to play. He is what many people consider a Medium champion as he starts out with the medium standard health and armor.

Using Doom Guy’s passive double jump ability you can make harder to reach jumps than some of the normal characters. A good example of this is the bridge on Blood Covenant to the Rail Gun. This “jump” is normally a very advanced jump on all other champions.

With Doom guy it is pretty easy to pull off.

As a side note, the Double jump does not slow him down during your strafe jumps.

I for one, use to think it did. So I would never double jump…

While trying to perform the core movement in Quake Champions which is strafe jumping. I quickly found out from a few pros and watching other gamers. That you should include the double jump to pick up speed.

I quickly found out from a few pros and watching other gamers. That you should include the double jump to pick up speed.

Doomguy or Doom Slayer is the silent hero who slays demons from the Doom games. He is a space marine and was first introduced to the video gaming world in 1993. Putting Id Software on the map for having such a heart-pounding first-person shooter.

Many think that he might be the descendant of B.J.” Blazkowicz who is also in Quake Champions.

The Doom SLAYER is an excellent champion and is a pretty well rounded medium champion.

I still, however, cannot recommend him to beginner players because of his double jumping ability. New players should focus on learning strafe jumping first.

After learning to strafe jump I’d highly suggest picking up this champion. Learn how to use his abilities for better map movement and fights.

Please be sure to share this guide out if you found it helpful at all!

Leave a comment down below on what you think about Doom Guy. Can’t wait to cover the
Doom Guy 2019 with the latest Doom eternal to release! Check back for a review on that game!

If you would like to learn a little bit more about all the champions. You should check out this who is the best champion in quake champions post!