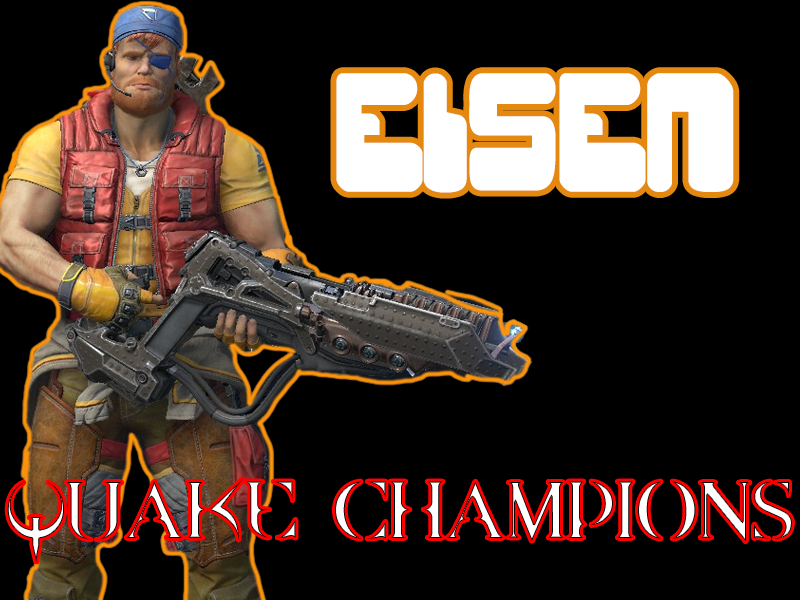 Quake Champions Eisen I have to stress here at first. He is one of my least favorite champions. For whatever reason, I really don’t think he fits into the mold of what I consider “Quake” like champions. None the less he can be a useful champion and I’m here to help with this helpful guide and tips.

Eisen is one of the champions specifically made for Quake Champions. He doesn’t come from any other games or games made by anything in the ID Software world.

My guess is that the original quake engine spawned the Team Fortress mod back in the day. Which had an engineer so they based Eisen off of that. I have no data or articles pointing to this. This is just pure speculation.

Eisen was released to the public in the November 2018 Patch.

Eisen active ability is his ability to create a small turret in the arena. He’s able to place “Wall-e” (My name for his useless robot.) anywhere he wants on the map.

There for a while you could even bounce the turret on a jump pad. The Quake Champion developers eventually fixed this bug.

Wall-e is good to place around certain parts of the map that spawn power-up items. Place the turret near the Megahealth and Heavy Armor and whenever he does damage you can tell the enemy is near this part of the map.

Eisen’s Passive ability is whenever he collects armors. If he collects Light armor (give 50) he gets 10% of his ability back. Collecting the Heavy Armor (100+) gives 20% back.

Eisen is a very defensive play style. This is just due really to his ability. His strong points are using the turret to defend items or the flag in Capture the Flag. Easily giving away position at the very least.

You can try to use the turret in an offensive exchange but most likely the opponent will ignore it and finish you off. Sometimes the turret can be a good distraction as long as it connects with a few shots.

Eisen players should always been trying to gather the light and heavy armor as this resets your active ability faster. You should still obviously go after health if you need it, but if you are playing Eisen you should favor the armor power-ups more.

Eisen is a decent defensive champion, I really think his strong points show up better in game-modes like Capture the Flag. I don’t see him ever being a META or a go-to character for Dueling or competitive modes other than objective based.

Eisen was the last champion added to the quake roster in 2018 and I hope 2019 hold some more memorable champions.

Let me know if you enjoy Eisen down below and why. I know there are several Eisen mains out there and I’d like to know what makes him your go to.