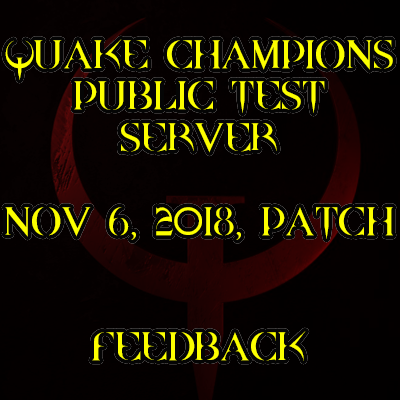 The Devs are listening!

You can check the full Quake Champions November 6, 2018, PTS patch notes over on the official forums.

I finally got around to check out the PTS late last night. Of course, there was no one online at 3 A.M. EST (hence why I want to push a nightshift server) so I had to play bots. Here are my thoughts on the previous patch.

A cool thing I noticed in the custom games is that have ADDED ALOT of fun game types. Also, now you can even play “Nightmare Bots”.

I decided to give an FFA full of Nightmare bots a shot, I figure here we go finally I can practice anytime I want. Nightmare bots still aren’t as good as human players. It’s not even close.

Perhaps they Nightmare bots aren’t completely active I don’t know but it wasn’t even close. I believe the bot that came in #2nd barely had half as many as I did. The game was to 50 I think it scored 23? Anyways it was still fun, and I still got killed a few times.

The best things they fixed in the Quake Champions November 6, 2018, PTS

This is the first thing I tested. The LG feels GREAT now, the nerf was needed and it still feels amazing to use and fun. It’s time to start Raining down 66666666s on people.

BJ’s ability isn’t as powerful but it’s not completely useless now.  I still think he needs just a tad more of a tweak but at least its BETTER and useable again.

I’d love to get a chance to try some Duels in the Quake Champions November 6, 2018, PTS. But, you still can’t duel bots for whatever reason and no one available to duel at the time I tried the PTS. If there was one thing I wish they would still reverse it would be the rocket speed. I really don’t think it was necessary to change but I think I can live with it.