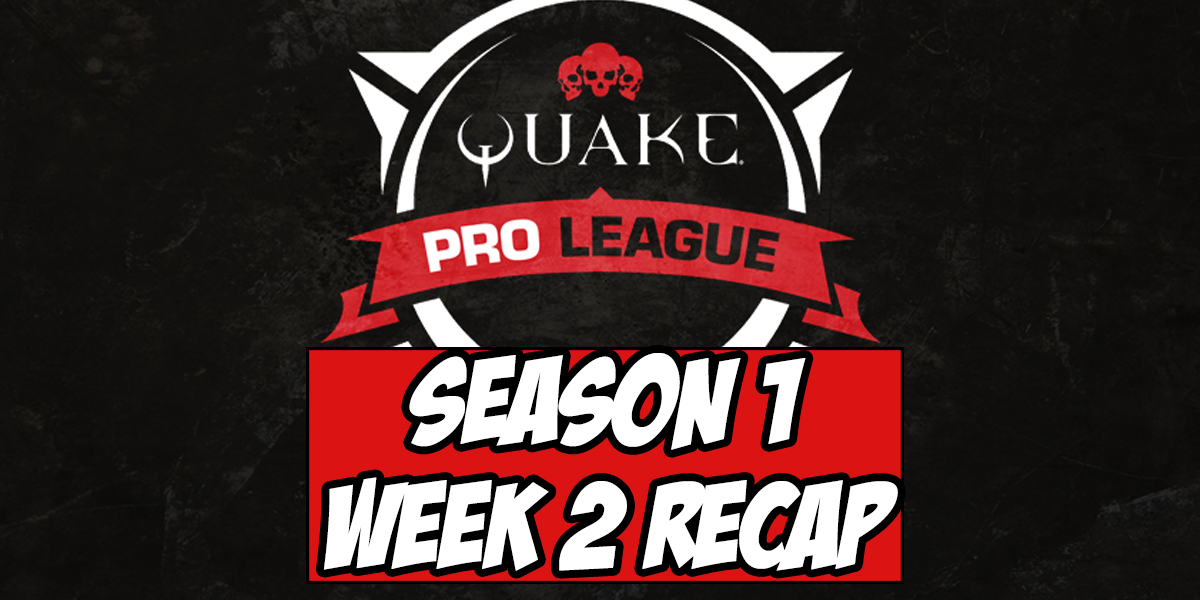 The Quake Champions Pro League happened over the weekend and I wanted to give some thoughts and input on the NA scene as that’s the only one I really got to watch.

I’ll leave the EU ranking down below but I was unable to watch all of the matches.

Its always interesting to see teammates go against each other.

Unfortunately for his Ascent teammate happens to be Psygib which is easily one of the best North American quake players around.

Br1ck is more familiar with team-based modes. He is steadily learning and getting better at duels on Quake Champions. But, this match was very 1 sided and I thought it would be closer. Round 3 was the closet match on Blood Covenant. Which if I’m being honest looks like they where just having fun playing instead of going full-on competitive mode.

Br1ck falls to last place overall after this match.

First we have to discuss this photo above.

This photo is brilliant in so many ways. First you have Dahang’s head photo-shopped onto someone else’s body with receipts laying everywhere. This is because hes an accountant in his full time job. Then you have Sib, with this nickname “Raw”. I’m not sure who decided that his nickname should be raw, or why they needed to surrounded him with raw vegetables. It was great marketing and hilarious.

Sib seemed to keep his cool and composure. Somethings he’s not known for and kept the 1st match VERY close. Round 1 went to a nail-biting sudden death face-off which the victory went to . Sib took the lead a few times in the round, I honestly believe molten falls is one of his best maps. So after keeping it close against . Color me impressed.

Round 2 Sib actual WON the round! Against on Vale of “P”- (emphasis on the p thanks state of ). Very shocked to watch this map. Again Sib showing no signs of getting mad and played cool, calm and collected. Securing a map off of and adding to his overall QPL points.

Round 3, Dahang decided enough was enough and got an early lead and didn’t let up. It wasn’t totally 1 sided but clearly, Dahang wanted to show his dominance and wasn’t proud of how he played the first 2 rounds.

This is one match-up you should probably go back and watch a VOD of as it was the only Match-Up that had a split at all (2-1).

Cha1n apparently got a new computer per source Rapha’s final comments on his interview (after all the matches).

It clearly shows he has stepped it up quite a bit. I don’t think Cha1n really got into real serious danger he dominated the majority of the matches and his rail was on point. Cha1n’s Athena is on a whole other level.

Whaz still played solid but was clearly no match for Cha1n.

Easily one of the most hyped up matches of the evening was Nosfa (from South America) vs. North Americas Rapha. a new Quake player and up and comer showcased his skills at QuakeCon and was ranked #2 in the Americas.

If Nosfa could even pull off a map from the legendary Quaker known as Rapha it would skyrocket him among the leader boards. Too bad the Chosen one decided he was going to play out of his mind and show everyone why he is still on top.

Just check out clip I grabbed from the stream. Rapha’s Lightning gun is just INSANE.

I don’t know if he missed a single shot in his limited amount of ammo in the last segement. Rapha is considered one of the greatest in the world at Quake and he played like he was.

Rapha gained 12 points giving him the most overall from week 2. This puts him #1 overall in the ranking even over K1llsen.

As much as I’d love to cover the rest of the Quake Champions pros I just don’t have the time or understand some of their languages. The matches you probably want to watch is the H1llsen and Cooler match that happened.

I do know the Effortless and Dramis both had a bye this week so they didn’t play.

I’m liking some of the new faces showing up in the Quake Champions Pro League NA and SA division. Let’s hope we start seeing some new faces along the way and keep Quake and arena first-person shooters alive for a long time!

looks like a promising foe to Rapha but Rapha said himself he is dreading Cha1n the most as he keeps improving. If you wanna play like Rapha you should check out his settings.

If you guys are liking the content you can show support buy simply shopping on Amazon over on https://shop.quakefans.net!