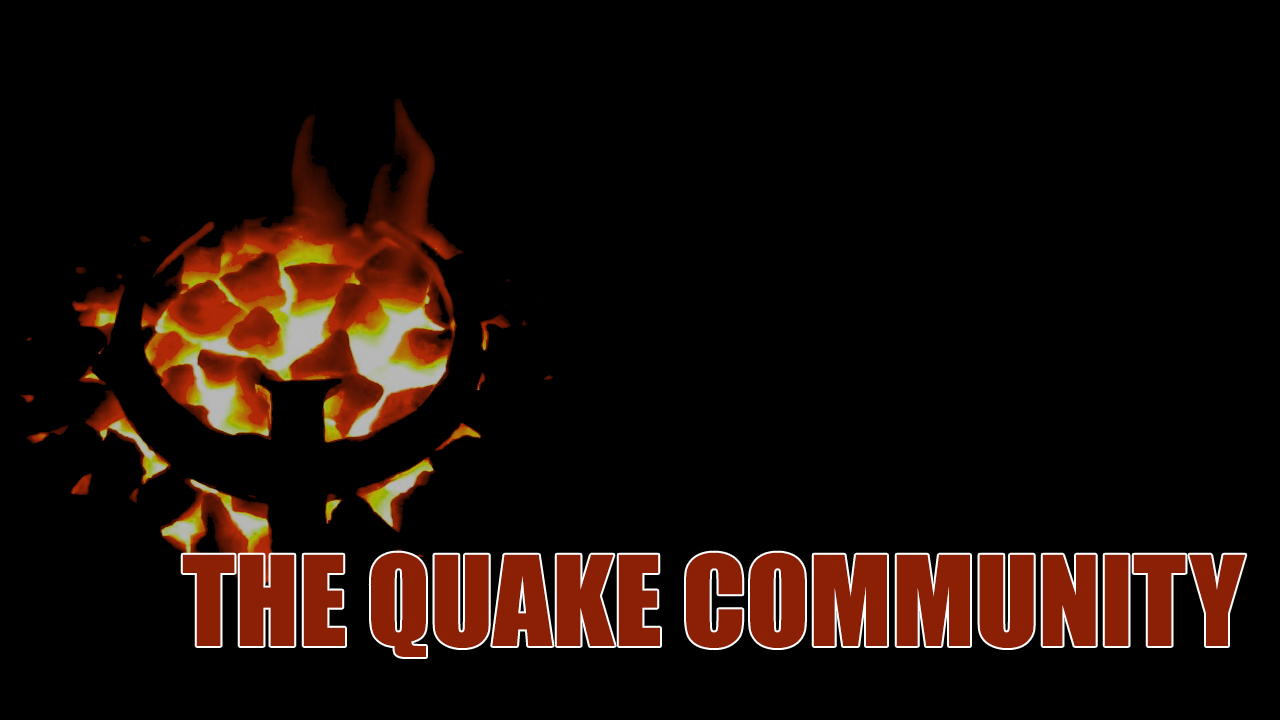 I’m new to PC games and the Quake Community. I’m new to a lot of things. Growing up in Bumfuck, AL, no one had a decent computer. No one knew a lot about the internet.

No one I knew anyway. Sure, we had the SNES, the N64, the PS2. Yeah I played Duke Nukem: Time to Kill with my dad.

But there was no great wizard to show me how to use a computer. It wasn’t until I took Business Tech in my shitty high school that the idea of PC gaming was made clear to me. Our teacher was… she was a nice lady. But let’s just say she wasn’t all there all the time.

So the one guy in the class lucky enough to have had some computer knowledge decided that the classrooms LAN was the perfect playground for us. One day he brought in a little USB stick for us to pass around, showed us how to upload the file and that file was Quake 3 Arena.

We never figured out who the infamous SkittleDick was, but man did he give us all an ass whooping that semester. And those ass whoopings left a forever impression on me about Quake and how much fun it could be.

Fast forward to early 2018. I’m married. I’m stationed in Arizona and have developed an interest in PC games after buying a laptop and playing Doom and Wolfenstein.

I do some Googling and find that these games I enjoy so much come from the same company. And that same company was famous for making another game. The same game I first played nearly a decade ago. I buy Q3 on Steam and start playing casually with my high school buddies.

Low and behold, another friend (a kind and generous soul) shows up to my house with a full-on gaming computer and says “I built this for you.” Instantly I’m teleported into this world of PC gaming. It doesn’t take me long to hear about this new game called Quake Champions.

Well… I gotta give it a try, right? This is what started my journey, isn’t it? I boot it up and play a round, school everyone and start posting screenshots for my friends of me saying “My first game ever and I’m the best in the world!”

What I didn’t realize was that ezPotat, imgoingmid and AbsolutePower had zero pings. They’re bots. And then I move on to real TDM with real people and I get CRUSHED!

Absolutely obliterated! But I’m not one to back down from a challenge, so I go scouring the interweb and find these tutorial videos by Chugg and FrothyOmen about shooting and strafe jumping and DPI settings and hotkeys and SYSTEM OVERLOAD SYSTEM OVERLOAD… I’m overwhelmed by the amount of shit you have to do just to be baseline competitive at Quake (or esports in general, as it turns out).

But I suck it up and keep trucking. My friend MicroArray and I start playing together and are quickly finding ourselves moving into the upper silver and low gold ranks as we get better at rocket jumping, strafing and dialing in our settings.

There’s just one more problem. We are shift workers and literally wait 20 minutes sometimes for a ranked match at night. So I message the devs. “What’s up with this matchmaking?” I receive no response.

Low and behold, I find all these Discord channels where people can find other folks to play Quake Champions with. Quake NA was my first choice. But there are all these self roles and bots. People are “LFD 2100+”. Who the hell is that good? Not me.

So I take a new route. I start meeting folks playing ranked duel. So I ask people who beat me “any tips?” I get mixed responses. Some people are cool. “Don’t jump so much in a firefight.” “Try to get your item timing down.” “Should have used LG instead of Rockets there.” Or as S L I P would say “Don’t run from my shaft.” Others… well, we all know what gamer douchebags say.

Eventually, I run into a guy who is perfectly at my skill level. Each round is a dead heat and we exchange “gr”s and “ns”s. The match ends with him shooting a rocket to kill me while simultaneously I ring out him with my lg. In the post-match chat, we exchange “gg”s and I ask him if he wants to meet me in discord for practice games. Steve is now (dare I say it…) one of my best friends <3.

I know about his fiancee and his cats and his worries at work. We are geuinely friends and I care about him and I care about Shaun, too. Another guy who, after I beat him, I reached out and said, “If you’re ever looking for practice, I’d love to play you again.” He said, “Absolutely. I’d love to learn from you.”

And as an adult now, living thousands of miles from home, I begin to realize… I spend more time with these guys and gals than my own family. These are the people I relate to. And why is that?

It’s because we bonded over Quake. Quake is not just a game to us. It’s a sport. It takes discipline and respect and a willingness to learn in order to be even passably good. It’s not a game you can just hop into and be a pro on raw talent.

Literally not one successful Quake pro is a completely disrespectful turd. And the douche-bags who respond to “gg” with “fuck you”… they’ll never beat Rapha.

Why not? Because Rapha is calm, disciplined, focused. It’s not a coincidence that the people I play Quake with have similar life philosophies to my own. It’s because this game attracts a certain type of individual (to a certain degree).

A person who is successful at Quake is a person who can take a humiliating ass whooping and stand up and shake the other guys hand and say good game.

It takes a person willing to learn from their mistakes.

Every day I read articles or see videos, Reddit posts, you name it asking “Is Quake dead? Where is everybody? Who are these people playing Quake?”

They’re the guys driving the big rigs, designing the user interface for your banking app, solving crimes, forecasting the weather for military jets to fly training sorties, bussing the tables at the restaurant you eat at, running security in the building you work in.

We’re like a nerdier Operation Mayhem from Fight Club. Instead of blowing up buildings, we’re just trying to shoot each other on the interweb.

So now, Steve, Shaun, like 10 other folks and I run this Discord channel for arena first person shooters. It’s called The Keep. It started with 5 or 6 people we picked up from a VR server called Nattiland. Now there are hundreds of us and we’re growing ever single day. We plan events. KYNerd hooked up with us to use this very website.

We meet up every day to practice together, to watch each other play, to give each other constructive criticism, to talk about our shitty days at work. And not only that but we’re constantly in contact with similar servers.

My good friend KillerNukem, for instance… God bless him, I never go a day without a message from him. He and KillerDuke run Quake Crew with even more people than us. There’s Pooky2Spooky’s Shed, QuakeTeamFortress, Ultraviolence, etc. There’s even a podcast called State of Quake ran by S L I P and Unkind (and sometimes dRon). COOLEST PEOPLE ON PLANET EARTH.

Together we pulled together a charity tournament that raised hundreds of dollars to donate to the victims of the North California wildfires this past year.

Because a guy in our server was affected by it. That’s what you do for your friends.

The one thing I’ve noticed, having done this for around 6 months (if you’re reading this now, it’s been longer than that), is that the thing holding the Quake community together is THE COMMUNITY.

If you’re out there, shitting on the developers who worked THROUGH THE CHRISTMAS HOLIDAY instead of being home with their families so you could get the frames per second and the character skins you wanted… c’mon.

Have a little compassion and human sympathy. The person on the other side of your keyboard is a real person with a real name and a real life. The game is getting better with every patch. You just need to do what you did when you first fell in love with this game and be PATIENT. And yes, there will be more CTF maps. More hiccups as well.

And let’s say, Quake Champions does end as a failed experiment. I don’t want it to be true, but for the sake of argument, let’s say it does. SO WHAT? I’m just gonna pack my bags and leave all these awesome people I’ve met behind?

There are other AFPS games out there that are just as enjoyable. Yes, in my mind, QC is the premier AFPS out there (right now). But we still all love the other Quakes, Reflex Arena, DuskWorld.

Diabotical is coming soon. I’ve even found a huge group of people playing Open Arena (if you haven’t tried it look into projectile delag) and they’re having a good ol’ time.

The community does not live or die on a single game. If we want Quake Champions to stay alive, we have to support it.

I’m not here to preach. I’m here to invite you, if you love Quake as much as I do, to join us for a pickup game. If you’re not that good, neither am I. Let me help you. If you’re an old crusty Quake veteran (like ViolentHeart 😉), teach me to play like you.

Be active in your “local” community and let the big things fall into place. Let’s get some “What would Rapha do?” bracelets to remind ourselves that, in life, you can be in the 3rd round, having gotten beaten in the first two, with two champs already dead, and still come back and win the whole damn thing. Quake Champions could die. It’s possible. I hope it doesn’t, but it could happen. But the Quake Community? We’re not going anywhere.