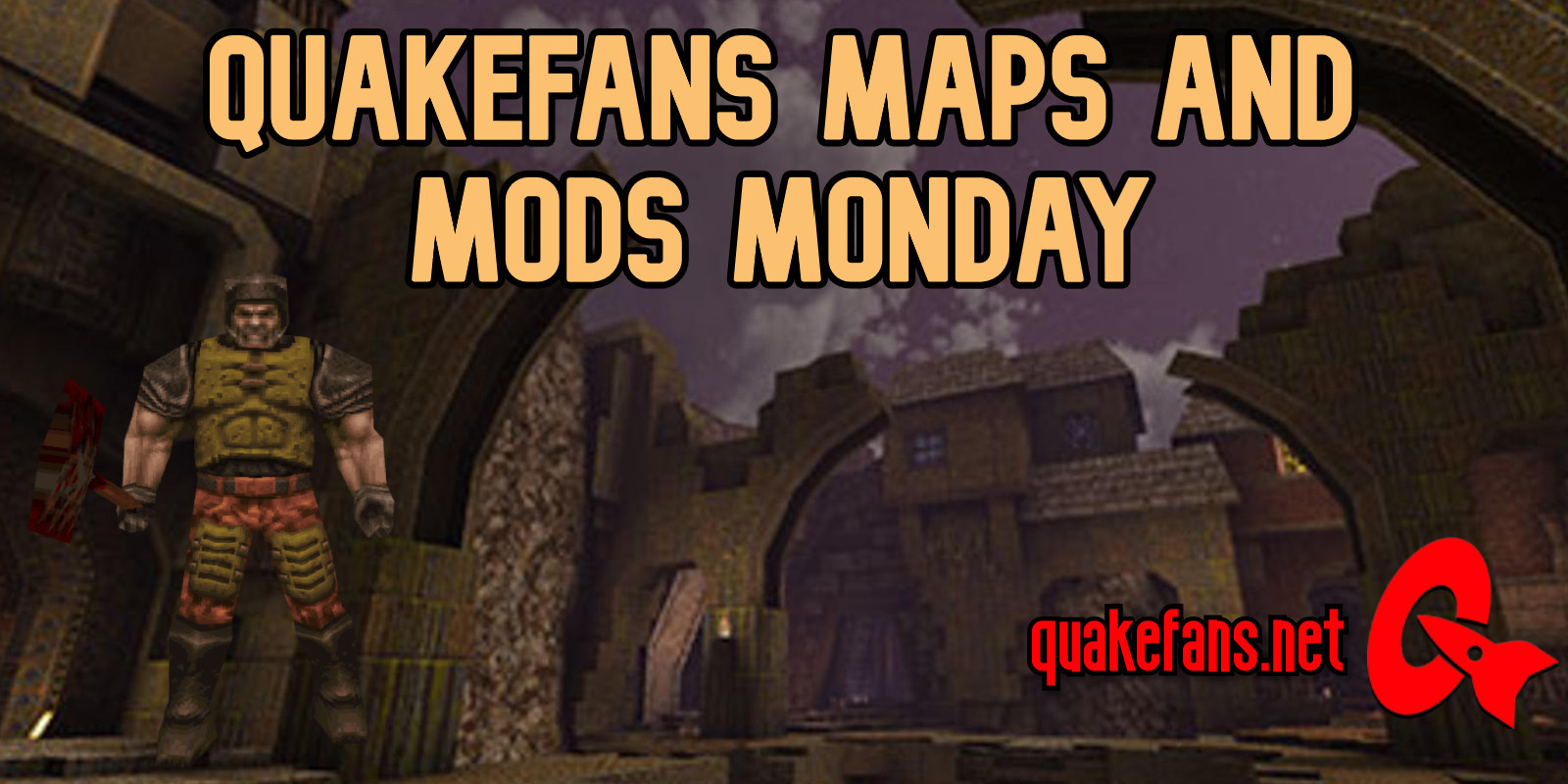 Quakefans has decided to cover a Map or Mod on the YouTube channel every Monday starting in the year 2021.

Below, I will be posting the YouTube Links to each video and where you can download them and a brief description of each. Eventually I’ll start posting some Top 10s on what some people should try out, which is already in the works on some of the other quakes.

This post will no longer be updated! Instead I’ve decided to release the maps and mods covered here as individual posts!

Quake – Basic Castle is a map that has been on quaddicted as long as the website has been hosted it seems like. So it just seemed fitting that I cover it first.

Overall the Map is OK, it is as it suggests its a Castle.

The castle is extremely hard to navigate I found myself stuck for at least 10 minutes and decided to use noclip to finish the map out.

You can beat the level and whenever some of the community get done with their runs I’ll post the walk through here.

I will say if you’ve played any recent Maps/Packs and you go back and play this one, the Quake Map Community has came a VERY long way. This is an interesting time piece and it still works today.

It’s pretty interesting to see what people where trying to do back in 1998 with the Quake engine. Being able to inject some other games code into an engine and getting it to run correctly is a great way to learn the engine I’m assuming. I have no idea if that’s what these guys did, just a wild guess!

Anyways the Quake Arcade comes with a single Map, which has Arcade Cabinets you can literally walk up to and start playing. It’s amazing.

Some games come with custom music, and sounds. Even full 3D games.

A few of the games feel unfinished, and on modern Quake Engines (Quakespasm) some of the games are cut off at the bottom, or are so tiny you can’t see them.

If you would like me to play a Map or a Mod, please add @Fansquake and sent me a message or public tag me that you want me to try out a map you’ve created. Glad to get all of these amazing creations some recognition. You can also use the contact form below as well and I’ll get an e-mail with the details.

I really love this mod. I can’t believe it existed in the year 1998. It is totally worth checking out just to see that it was even possible to do this back in the day.

Ranger can grind, kickflip, and indy his way through most original levels. The mod features it’s own hub, so you can skate directly to what map you want to check out.

Pulling off a grind is a lot harder than one would think. You need a little bit of speed and a slope down hill to really pull one off. It might be due to the engine’s physics I’m not sure. But, don’t think you are going to grind like you can in THPS.

This might be one of the highest Quality Quake Mod’s I’ve ever seen. It’s hard to believe that this was even on the Quake Engine without it tell you so. Many things do feel similar but everything is changed.

You even get some cool Cinematic Cutscenes! Which I don’t think was available ever in the original Quake Engine. As long as you have the full version of Quake you can play this masterpiece all you need is the download!

I’ve always loved Final Fantasy growing up as a kid. So it’s kind of nuts that someone decided to combine 2 of my games into 1 Special Mod. To bad the MOD doesn’t feel complete, I think its actually a BETAV1 according to the documentation so keep that in mind.

It’s not really a great mod, but its awesome that it even exists on the planet. You get to be Cloud Strife and you can go around killing Quake Monsters with a buster sword! Apparently there is a leveling system but I was unable to figure it out.

In this episode we cover a Quake Map by the Author IcarusAvery.

I chose this map… well for a very simple reason. It was the most recent map! I figured I done the first map EVER on quaddicted… why not do the latest! It’s your lucky day today IcarusAvery!

Anyways this is a small map and you will have limited resources. I was unable to find all the secrets so download and play it and tell me in the comments where that last stupid secret is! Pretty decent map! Keep on Mapping Icarus!

Another monday, another mod!

Today we take a quick review/look at the legendary Team Fortress. Personally whenever I think of Team Fortress, the first thoughts are on my mind is Team Fortress Classic.

TFC was the only game I knew that provided classes in a FPS in a solid experience. Whenever I found out that Team Fortress first started as a Quake Mod I was befuddled!

I couldn’t imagine playing this in August 24, 1996 the original date for the original engine. Honestly, I think I should play that instead of the Quakeworld release. Maybe in a future video?

The Teamfortress team eventually ported the game over the Half-life mod and became Team Fortress classic.

Want to play the most modern version possible – Check out: https://www.fortressone.org/

Yes, you indeed read that correctly. I’ve finally decided to throw my hat into the ring of making a quake amp.

The Shamburgler maps are going to be a series of maps. Simple, because well… that all I know right now.

Each map will feature a shambler you need to defeat and eventually you will make it to the final Shambler, the true Shamburgler.

This is a work in progress, a very slow progress.

Really, I just wanted to showcase that even myself can create a Quake map and that you can too! Trenchbroom isn’t that hard to use once you figure it out!

Every wanted to do a flying dragon kick, or slash up an enemy with a Katana in Quake?

Well now you can! With this mod you can do just that, do some kicks, throw ninja stars, and slice and dice your way through the original Quake Single Player or custom maps!

This mod I enjoyed way more than one probably should. Everything is turned into cookies, your grenades, backpacks, etc. That’s not all you also have Cookie Monster sounds whenever you pick up health, find armor, secrets and more!

Cookie Quake really adds a fun and silly level of enjoyment to the base game of Quake. Its worth a download 100%

I was actually a little disappointed in this map called The Office. A better name for it would be like the tower of doom or something along those lines.

There is no office computers, chairs, anything. Basically there is an elevator that takes you to different levels in the map which is filled with mobs, you killed them and maybe gain a weapon.

Great Idea and was fun enough. I guess the idea is to make it to the top which is filled with Shamblers so be prepared.

Considering that Halo came out in the year 2001 its pretty wild to see the models and stuff in a Quake Engine. I really enjoyed seeing the game even though this project has been abandoned it is still a great mod.

The Multiplayer maps seem to be really well done at least the completed ones look great. Of course ladders are weird on the Dark places engine I guess they’ve always kind of have been.

Playing Single Player with the Halo mod the pistol is super overpowered as the pistol is a automatic shotgun. So playing on nightmare was a cake simply because of that.

If you are a quake fan and halo fan you will enjoy this mod.

If you’ve ever wanted to do a Hadouken inside of another game… Well now you can! You can pick 5 different characters 4 being from the Street Fighter game series.

Some of the models are better than others the Chun-li character has moving legs and looks better than the Ryu and Ken characters.

It’s nuts that this quake mod even exists. I was surprised to discover it and its well worth just jumping around and hitting some buttons.

More quake maps, mondays and mods coming! Be sure to check back everyweek on Quakefans!