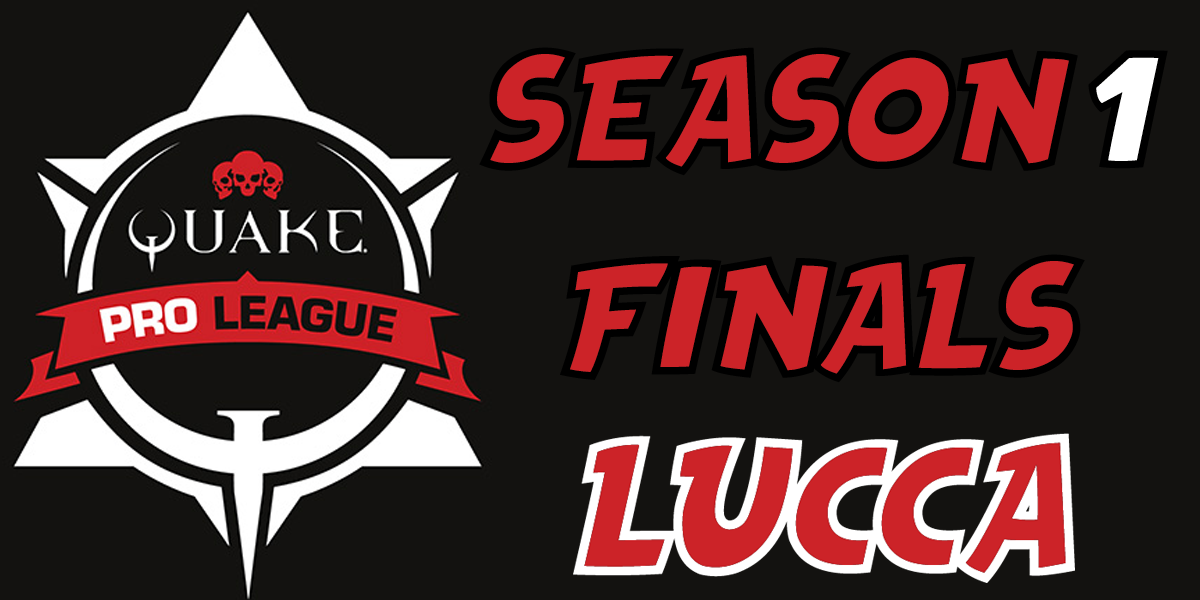 Quake Pro League Lucca kicks off this Saturday! The first match of the day is suppose to start around 4 A.M. EST! The Lucca LAN Event is part of the Season 1 QPL as this is the Finals for Season 1. At least this is the way I understand it.

I’m hoping I can WAKE up at 4 A.M. what a rough time! At least the VODs will be available either on Twitch or YouTube later in the day I’m assuming!

Where to Watch the Quake Pro League Stream

You can watch the Finals over on twitch.tv/Quake or heck you can just come hang out right here on quake fans and watch it embedded if you want too.

quake streams live on Twitch! Check out their videos, sign up to chat, and join their community.

Rapha was the top points leader throughout stage 1. Making him the #1 seed and taking out his Teammate (Dahang) to be in the top 4. In what was a crazy final map in Season 1 week 10 of the QPL.

What’s really interesting about this is the format of it all. It is Best of 5, then best of 3, then to the final rounds it goes back to 5 again. So we will have tons of elite quake action to watch!

If I were a betting man it is hard to bet against the goat known as Rapha. As he has won many Tournaments before even stepping foot in the QC realm.

That being said everyone of the listed Finalists have won tournaments, most recent is K1llsen with the QPL kick-off at Quake Con. Another thing to note is we have 4 new challengers showing up.

If they win they will be added to the QPL Roster! This is BIG and exciting for some of these guys. I’m really excited to see GNik perform on the big stage! GNIK has won many online tournaments ever since QC has begun.

What Quake Pros are on the Chopping Block

To make things even more interesting for the Lucca stage. We have several Quake Pros heads on the chopping block.

In North America we have Sib and Br1ck, in the European division we have Garpy and Spart1e.

Even though Garpy and Spart1e have more points than NA Quake Pro Effortless they have decided to free up room on both divisions.

EU currently has a better reputation for having more high skilled players than NA, but with upcoming talnet like GNIK who has beaten Effortless on many occasions this will be very interesting.

Everyone should remember the Sib controversy in the back of their minds.

What is the Quake Pro League?

The Quake Pro League is the e-Sports Division for Quake Champions. With prizes and LAN Tournaments held after 10 weeks of Sunday Matches.

The Quake Pro League also holds a Challenger’s League on Saturdays. This League is for the up and coming Quakers that want to show what they are made of against veterans such as Rapha on the big stage.

To start the QPL it was invite only but currently after Lucca we will get to see how the Challenger League effects the overall Quake Pro League.

I’m for one really excited and cannot wait for the Quake Pro League Lucca event! I’m going to do my best to wake up bright and early Saturday morning!

With the newcomers being a welcome addition I really wanna see how far they can get into the tournament! Mixing it up on LAN with EU and NA. The matches get very intense at final stages!

The Pros that I would look for to win this thing would Rapha, Coolerz, and K1llsen.

Other maybe choices are Dahang and Raisey, but don’t take your eyes of Vengeur either the kid has talent and getting much better!

This should be an exciting tournament and one you won’t want to miss.

Let me know what you think down below and comment on who you think is going to win LUCCA!