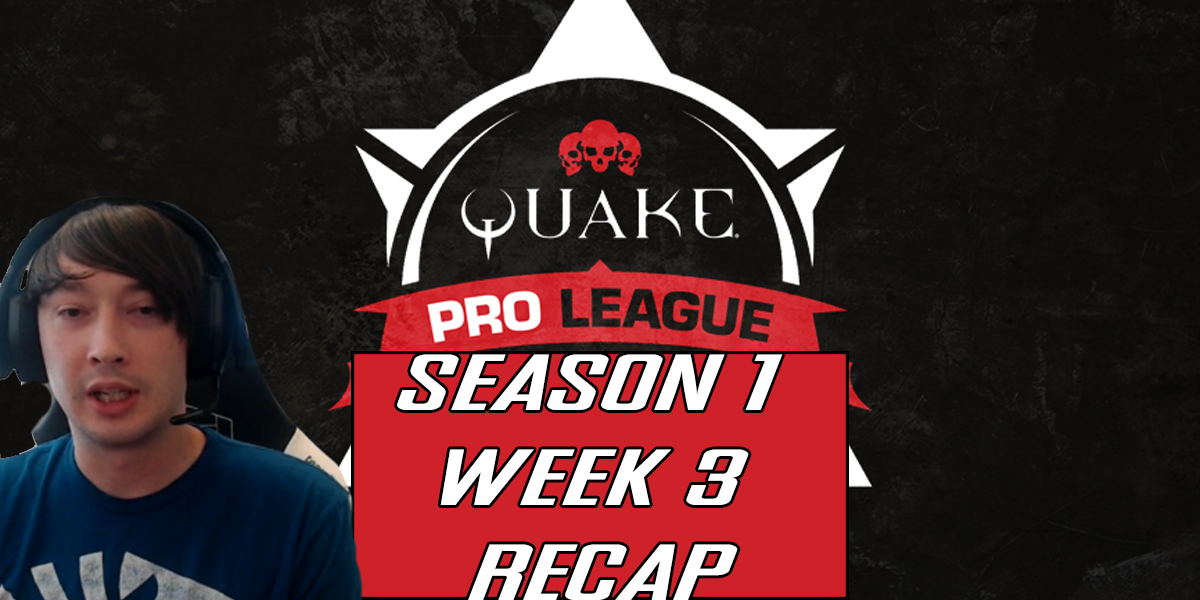 Below is the Quake Pro League recap that I thought was interesting match-ups or not so interesting. I want to start off by saying the Production Team producing the QPL is amazing. The Quality and Commenting has been top notch!

Let me know your favorite matches down below in the comment section!

Truthfully, I thought this match would be a lot closer. Tuns out that Coollerz decided to dominate each round.

Mytro came out strong in the first round against Xron. He even had the lead for the longest time because Xron decided to go on a spree and clinch the win. This match-up was more evenly matched than what the score showed.

One of the best match ups of the day goes to Av3k and Raisy in my opinion.

Round 3 is the best one to watch completely down to the wire. All rounds stayed close was very exciting to watch. True Quake worthy competition.

Vengeur ending up taking the match 2 – 1 gaining him some massive points in the rankings! The new blood decided to really take it to K1llsen. I believe all of K1llsen’s powers disappeared after he dyed his hair blue.

I believe the Quakecon 2019 World Champion will make a more valiant effort next match-up.

Overall team Myztro had a great showing today and can’t be disappointed in any of their players.

This really was a toss up in weather who had the better advantage.

Map 2 was ALOT closer than the 5 – 1 score shows. Whaz had control several times and a few mental mistakes like allowing the railgun to run out of ammo was crucial in the end.

Dramis showing his expertise with Slash in Map 1 running and railing. Very close in skill in my opinion a great match to watch!

Dahang showed dominance early on each map. Effortless kept it kind of close in the first map but Dahang controlled everything pretty flawless on map 2 and 3. I thought we would see more even match after the first map granting Effortless the railgun.

Team Liquid continues to display the reason why they are on top of the e-Sports scene even on Quake Champions. With Shane and Tim leading the rankings.

Woah, Map 2 on Ruins of Sarnath was just a true chess match of Champions. Not many frags but what a performance by both quake pros.

Map 3… What a match. Cha1n had it for the longest time. Nosfa didn’t give up and took the game literally down to the WIRE. It was anyones match at the end. A few different rails and shots that connect and the game could’ve went to Cha1n. Great Match-Up Worth watching!

This was the match I was really looking forward too.

I thought Psygib would be keeping it a lot closer than the actual score shows but that only happened in round 3 / map 3. Rapha decided that he would play out of mind and come back from behind giving him the 3 – 0 victory.

If there is one thing you can say about Rapha is that he never stops playing no matter what. Always holds his composure and keeps chugging along.

There was a sick Rocket Dodge on Awoken I tried to clip it during the Live but it failed for some reason. On Vale of P-nath Rapha has the Rocket/Orb combo down to a science and made Galena actually look mortal.

If Rapha keeps going 3 – 0 on everyone he plays I don’t know if anyone can catch him. He is almost a full 10 points ahead of K1llsen now. Coollerz isn’t far behind in the Frags category at least.

I really want to see some of the lower ranks pick up and especially Br1ck and get a few wins under his belt.

Quake Logos and Images from the pro league are property of Bethesda and Id. They are not affiliated with Quakefans in anyway and opinions belong to Quakefans only.