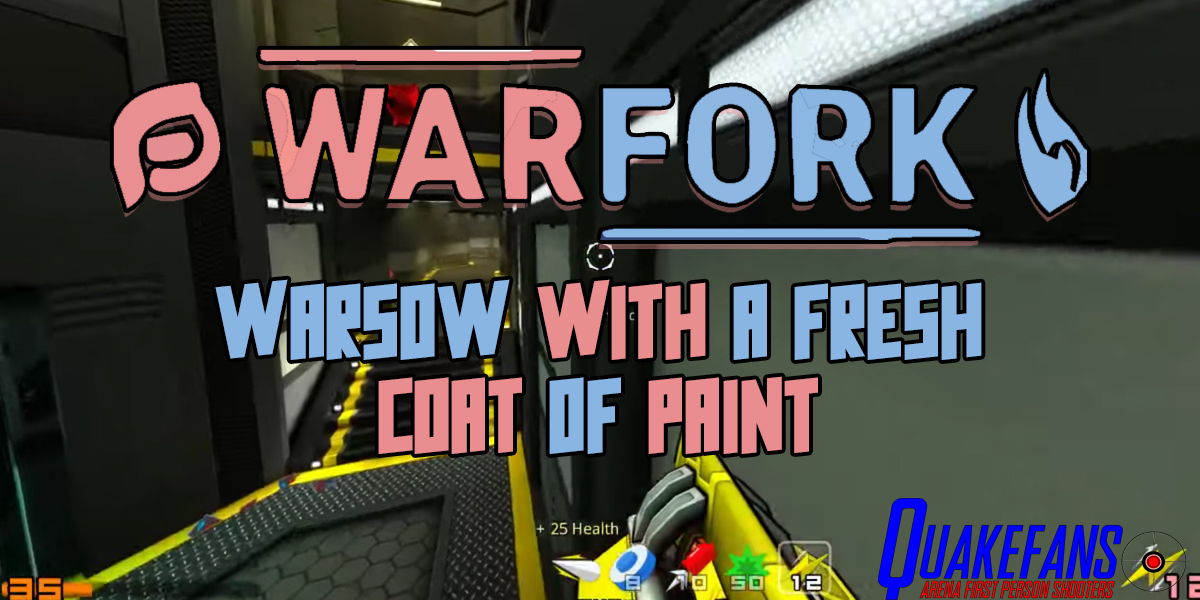 That being said I’ve had a blast the last couple of days running a server and play Warfork! You should join my discord community below and let’s get a warfork match going!

Warfork is a Warsow Fork

If the game is looking familiar for some reason. That is because it was a fairly popular game called Warsow (Which has been abandoned.).

Warfork is a demanding fast-paced first person shooter with a focus on speed, aim, movement, and above all competitive play. There are no gimmicks such as leveling up, purchasable weapons, gory graphic violence, etc.

The game is a fork of Warsow. This game replaces Warsow trademarks with their own. (Most of this is directly from their steam page.)

Check out some awesome dueling action that happened on the QF server! Also, enjoy this Warfork Guide!

Whenever you play just about any Arena FPS it helps to know when the power items spawn. This helps to control the map and help to defeat your enemy easier. If you can control each power-up whenever it spawns and not allow your opponent to gain a power-up you can find yourself an easy path to victory.

Items like these are usually Armor and Health Pick Ups. Down below is the list of the timings for each item in warfork!

These timings should help you better control center points on the map!

Warfork Make a Server and Setup

I ran into a few issues running a server for this game. Warfork uses a lot of the same resources that Warsow had so that was a good thing.

The bad thing is most of the documentation is lost or just on archived websites. I’ll do my best to help, this will be a brief breakdown I’ll to do a more in-depth post in the future.

Do not run on a Windows Environment.

In the past few days I’ve tried my best to get a server up and going for this community. I finally accomplished that.

I highly recommend running on a Linux Box.

The server didn’t perform very well for whatever reason in my Windows Server 2019 environment so I threw it on one of my Linux Distros. Which started getting connections almost instantly.

Running a server is a great idea to even build your own community.

Let me refer you to the SteamCMD setup page for most if all not operating systems. – https://developer.valvesoftware.com/wiki/SteamCMD

After getting SteamCMD setup, you will want to login with YOUR steam ID and Password. Anonymous did not work for me and did not give me server binaries.

I’ll refer to most of psymin linux setup.

Yay, now you have all the files you need. But what do you do next??

You need to be able to navigate to the files you just installed most likely they will be in your home directory unless you installed on a different user which some Linux admins do.

Trust me it would help if you knew some Linux before attempting this. You will need to be able to edit the file dedicated_autoexec. /home(username)/Steam/steamapps/common/fvi/Warfork.app/Contents/Resources/basewf/dedicated_autoexec.cfg

I usually use nano to edit my config files. If you are using Windows you can use Notepad++.

You need to replace this with the name of your server in parenthesis. It also wouldn’t hurt to set up a password so you can work on it while in the game.

Replace “1234” with the password of your choice. Save, exit, and restart your server. Now you can hit the ~ while in-game and log in rcon_password "1234" you can issue commands while in-game.

Windows you simply need to click on the 64bit.exe

Only run your server AFTER you have configured your configuration file!

You will also be wanting to set up your router to allow port forwarding to your server. So hopefully you know a little bit about networking that helps! You may have to research your SOHO router to get to your configurations.

Normally whenever you are port forwarding your small office or home office router. You will want to create 2 different rules.

Set these ports to trigger the IP Adress your server instance is hosted on such as 192.168.1.100 as an example.

You can change these ports if you would like, please do so in the dedicated_autoexec.cfg file!

Check out this post for a more in-depth read on Warfork server hosting.

LinuxGSM is a great tool to add to your Linux Server Admin toolbox, it can help even the most novice Linux admins out there get started!

Sometimes though you will run into problems that aren’t documented anywhere but you should check it out anyway.

Here is a video of how easy it is to get it up and running with some commentary.

You can color your name and clan tags in this game! Just use ^1 it before each letter.

Example ^1S^2A this will make the S and A 2 different colors.

You need a cool colored name and a clan tag! Because why not!

I’d really make sure that you set up the opposite team so they show up nice and bright. This will help you be able to pick them off from a long range and see them easier around the map as a whole. Go to “Team” and click full bright skin. I chose yellow because it’s extremely bright and easy for me to see.

Below is a list of all the game modes and types Warfork offers!

If you are needing support and want to ask more questions that might not be here you should join the official Warfork Discord.

You should also check out our community partners The Keep Discord! Home of Arena and Retro Arena First Person Shooters! Join if you want awesome people to play with! Someone is usually looking every day to get in a few games.

Looks like lots of newer people are giving this game a shot! Which is great for all of us Arena FPS fans out there!

Maybe take it easy on some of the newbies… If you notice they can’t strafe jump, use the dash button… maybe take a moment our of your busy rocket and rail combo lives and try to help.

I’d say I’ve already helped out a few noobs within just over the weekend! Don’t scare them all off we need people to continue playing!

While the development team is hard are work trying to provide new sounds for warfork… I’m not trying to be mean but the in-placement ones aren’t the best. They are far from the worst sounds I’ve ever heard but if you can use Quake Live or Quake III sound you would right?

Well, guess what!? You are in luck because Warfork supports those files!!

Warfork ships with a bunch of decent maps, but since it allows you to use awesome maps from the community… It opens up even MORE possibilities!

The engine supports the use of Quake 2 maps, now you sort of but not really can just place any map from Quake 2 into your basewf folder and it’ll run. It might not run GREAT and sometimes if you run a certain mode it will crash the game.

I think it’s due to spawning points or object points not being set for Warfork.

Here is the suggested map pack from The Keep these maps are played and work great!

Below are the maps included

Note: Warsow Maps work with Warfork. So if there are any old maps you loved in Warsow drop them into your warfork folder!

I’ve had a blast playing this game and I’m going to continue playing. I rank this game much higher than many other AFPS I’ve played. Reflex comes to mind as this game slaps it around like a red-headed stepchild.

You will need to be fast! Learn to strafe jump, ride rails, and us that dash button to get around the map FAST. This game is much faster than the more popular Quake Champions which is currently the leading AFPS. The skills are transferable though.

If you play Arena First Person Shooters at all then you should feel right at home with Warfork. You can download the Warfork game on steam right now!

Also catch me live over on Twitch!