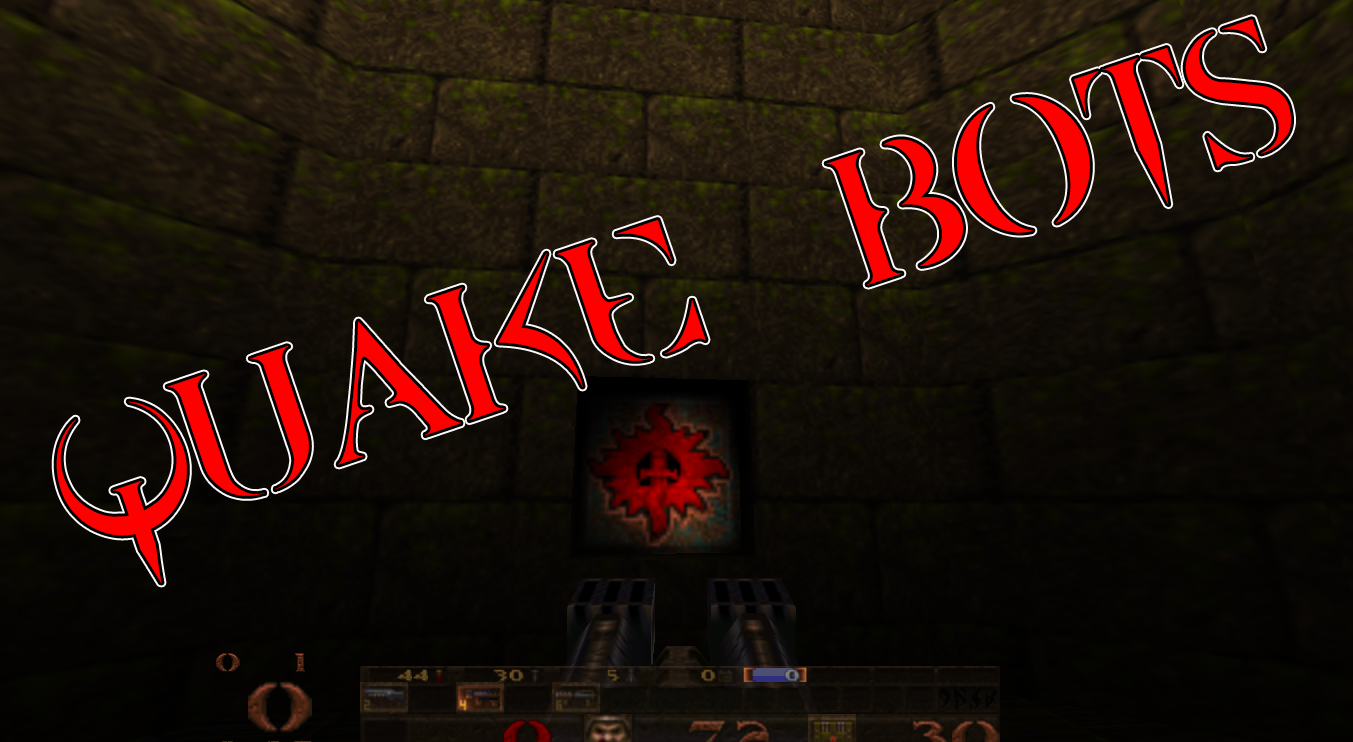 Bots where meant for players of games like Quake and Unreal Tournament etc. Whenever most people didn’t have good internet, you know 56k and such. Also, more games offered offline or custom bot matches. This was because most players were not comfortable ONLINE to begin with at least not yet. You had stages you could climb on Quake III and Unreal Tournament and even difficulties. Both of these games could be played offline and you could hone your skills before jumping into the real challenge, online multiplayer. So the simple answer is for new players and offline matches. Bots also allow us to preserve some of these older games and we are able to simulate a match.

These days in 2018 and the time of this post. Most games are always online. You can’t play Quake Champions offline so I’m not sure why bots are included in Quake Champions. Quake Champions has it’s bot usually come in to fill in a person that has left.

First Bot ever Made

It is believed that Steven Polge wrote the first bot. Known as REAPER BOT. The dude picked a great name for a bot for sure. It really does stick out. This bot is said to challenge the average gamer good enough. I’ve seen the bot in action on the original Quake. Whenever you think of modern gaming, they make aimbots for cheaters. The reaper bot is basically an aimbot that tracks your movement and gathers pick up items. Kind of like a normal human would or should. There are said to be ways to trick it by not even moving.

Still very impressive considering when this bot was released.

You can still get the bot and use it! Find it here!

I did get to test the bot out. It even works with the Dark Places engine. To sum up Dark Places it allows you to run Quake on modern hardware and enhance the experience.

After testing and making my .bat file for reaper it does in fact work! So I was able to play a few matches of Death Match.

The bots are super fast for some reason, more than humanly fast. I’m not sure if it was because of the dark places engine or what. I was still able to get a few kills.

Although it wasn’t easy at ALL. The bots do in fact aim almost perfect every time, and with superhuman speed. It was good enough to get a good feel of it though.

Check out the video below to see it in action.

Quake original didn’t ship with bots which is where reaper came in to play. Quake III and Unreal Tournament however did. If my memory serves me right.

After watching this video I learned quite a few things.

The dude that made the Reaper bot went on to create the bots for Unreal Tournament I believe. Pretty awesome that these 2 giants went head to head in the arena only and really was based completely around online action. Both Q3 and Unreal Tournament were both good game at the time, obviously, I preferred Quake III a million times to Unreal Tournament.

Unreal Tournament was still a great game though and was a worthy foe to Quake.

The bots that Quake Champions use, well. They don’t seem to be the best. Unlike the original “reaper bot” still put up a challenge.

I’ve tried the bots on Nightmare and while they can still kill you, they really don’t feel like a challenge. Perhaps I’ve just gotten better at first-person shooters with my old age. Nightmare bots though ignore everything. I guess the competition of a real person playing is unmatchable against bots these days. I would figure that with the great minds behind iD Software and Saber. That these amazing developers could put out some worthy bots.

Playing against bots in older games was actually, fun. Playing against bots in Quake Champions just seems unfulfilling. I remeber practicing against bots all days to hone my skills on Quake III before ever attempting online. It was still fun to do so as well still had a challenge. The bots that are currently in QC is missing something. Usually, if someone leaves the current game and are replaced with a bot. The other team basically automatically wins.

What’s even sadder is in the last patch they tried to mask them with fake ping again. Come on guys, you all are better than that. We’ve gotten smarter throughout the years, we kind of know if we are playing bots. Well most of us anyways. I really hated bursting peoples bubbles whenever I would get them to play. Then they would brag to me about they had 30-40 kills in their first match.

Then it came down to well, do I break it to him that wasn’t against real competition? I think this was before that made it where you had to face bots at first as a new

I think bots do help preserve old games and give the feeling as it did back in the 90s to some degree. The bots in Quake Champions, however, do not deliver the same feelings. As of this posting, the bots are a bit underwhelming. I’m sure the developers are really worried about bringing out some other awesome content. Rather than focusing all their time and effort on making a good bot.

Bots WOULD help out more. They do need to make the game to be able to play OFFLINE though. With some GREAT bots to play against and practice before launching into the real competition. It would make some new players in my opinion. I know this helped me whenever I first discovered Quake III. So many great quake matches where had against bots jumping and railing around on the longest yard WAYYYY before I decided to play online.

With great bots, and some may be better servers I think Quake Champions will be heading in the right direction. I miss the good old days of the server browsers as well but in the modern age, we live in. I don’t think server browsers will ever be a thing again. I’m sure there would be many people willing to pay for their own servers or host there own. With the “Free 2 Play” model I don’t really know how it would work. Perhaps they need to take a step back and look how Team Fortress 2 still kind of does it.

Quake is where it is at.

Quake will still be around long after I’m gone. I really want Quake Champions to succeed. I hope everyone has enjoyed this little post as I’ve tried to put some more time and effort into making some decent posts. Doing all the research I learned some things I never thought I would otherwise. Playing against the first bot ever made is pretty awesome in 2018.

Don’t forget to comment down below. If I made a mistake! Heck, let’s hear about it! Got some more information on the subject by all means! Comment down below and share this all over social media. Let’s get more people on Quake and having a blast. Be sure to subscribe to the email mailing list!